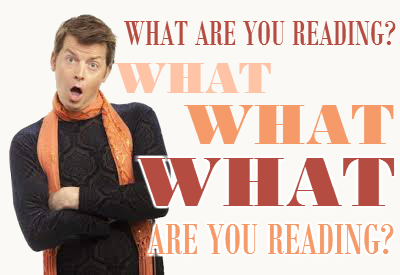 Reading Update: It is Monday, March 3, and as of today I’ve read 21 books toward my goal of 52 for the year. I’m beginning to think that I may want to change that goal earlier as opposed to later; I never dreamed I’d be almost halfway there before April. Of course, a lot of my reading has been less than totally intellectually challenging or time-consuming.

In the past week, I’ve read three books. One of them — a baby book called Red Dog — doesn’t have a cover image anywhere online. Here are the other two:

Jane, the Fox & Me by Fanny Britt and Isabelle Arsenault, is a very beautiful illustrated story — graphic novel? sorta? — about a girl in Montreal who finds herself ostracized and bullied by the girls she once thought of as friends. Unhappy with her life, her changing body, her clothes, Hélène hides away inside the world of Jane Eyre and uses it as a lodestone for the better life she hopes one day to find. The fox comes into play when Hélène goes to a school camp, encounters the titular creature, and makes a new friend. It is beautifully illustrated and a lovely sort of thing to read on a drizzly afternoon. A lot of women/girls will be able to empathize with Hélène.

Where Jane. the Fox & Me is lovely and intimate, Boxers is awful and epic. The first in a pair of graphic novels (the second is Saints, which I hope to read this week) about the Boxer Rebellion of China in 1898-1900, it challenged, disturbed, and educated me. For those not in the know (like me, pre-reading), the Boxer Rebellion was a violent uprising against foreigners — specifically Christians. This book puts the reader on Little Bao’s team, makes him a sympathetic and even inspiring character, and then makes the reader watch as Little Bao commits atrocities. Except, of course, you’re left wondering what “atrocity” means, and what the spread of Christianity really looks like to the non-Christian world, and ultimately it’s all just kind of hard to read (and impossible to put down). The illustrations will make this accessible to younger readers, but the subject matter makes it a book suitable for adults. If you’d like to know more, I encourage you to check out this review from GLW.

Currently Reading: I have been flipping through a couple of different books. I’m going to go ahead and claim Saints, although I haven’t opened it yet, because I know I’m going to read it in the next day or two. I think City of Dark Magic is going to stick (that is, I think I’ll end up finishing it) although I’m not going to make any promises just yet. Other books on my “I’ve read a few pages but I’m not committing yet” list include Outlander and These Broken Stars.

Looking Ahead: Probably could have lumped this category in with the previous.